On October 28, 2017 I went on a day trip with Dennis my brother and a friend, Karen to Pioche, NV.  Not thinking this trip was about to take many turns, I had planned this day would be short ending with us coming back from Pioche in early evening at the latest.  However after arriving there, Dennis soon discovered there was a ghost event being held that same evening and we were interested in attending.  I asked Karen and Dennis both if they wanted to join the event and all three of us agreed we could try it.  This would be a extension to our day but it would make it very interesting.  There was a paper flyer attached to one of the windows of Thompson's Opera House with a name and contact phone number on it for the person who was conducting the ghost tour and event.  I called and Nikki answered.  I was inquiring about the price and what this was about.  After a short conversation with her we all decided to try to wait and join in the event.

As the event didn't start until 6 pm and the time was only 12:30 pm we started to walk through the town to see the historic buildings.  I was taking photos and Dennis and Karen were also documenting the sights.  As we went past all the main street shops some were open for business but most were not.  The closed businesses seemed to be used mainly for storage of old furniture and the like...mostly antiques.  As we went down one one side of the street and crossed over to the other I noticed the Lincoln County museum was opened to the public.  The last two times were here it wasn't opened and this fact was a littel disappointing for me.   We entered through the wooden doors and walked in.  There was a lady who was sitting at the front desk to the left.  She welcomed us in we all said our hellos.  She instructed us on a brief history of the building and artifacts inside.  As we walked around the displays I could sense some had residual energy around them.  In certain areas there were cold spots and we were feeling oddly...as in dizziness and heaviness.  Karen and myself are both sensitive to energy so we were being affected by all this.  As we crossed over to the other side of the building and was walking down the aisles to look at the items, Karen and myself both turned towards the display case at the exact same time and was looking at photographs of a family.  I felt dizzy and a strong sense of someone being there and so did Karen.  She reached down to try to see if there were a cold spot and yes there was!  It was low to the ground and in front of the two photographs of a husband and wife.   Without being able to fully debunk or prove this was a spirit I would have to put this to a personal experience.

As we came back to the front desk with the lady sitting there Karen started to ask some questions about the museum building as she was picking up on some of the history.  After Karen asked if it were a meeting place originally and then a general store of some kind the lady said yes.  They think it was originally a saloon and/or brothel then it was turned into a general store.   The lady's eyes became larger at the information Karen was giving to her.  Karen also had a strong feeling from the Gem Theater down the street.  This was the reason we came down in the first place...for  her to do some researching on the history of the place.  She asked the same lady if there was a male worker who started very young at the theater but was employed until he was much older and she said yes!  Karen believes the male worker in spirit was the one who has 'pulled' her to Pioche from one of my photos.  We talked more about the theater history and then the lady at the desk started to reference the ghost tour later on in the evening.  We suddenly realized this was Nikki who I had called earlier about the event.  Nikki was a local paranormal investigator who also worked in the musuem by day.  She is also entrusted with the keys to the Million Dollar Courthouse along with the Thompson Opera House.  We said we were going to try to stay for this event and she welcomed us to join along.

As we left the museum we went to a local coffee and art cafe....Ghost Town Art and Coffee Company owned by Kelly Garni.  We walked in to have lunch and sit for a while to rest.  Kelly was a very friendly man and was very interesting.  He said the whole town is said to be haunted.   Pioche was founded in the 1870s and was the most violent town in those early days.  More people died of murder before the first person died of sickness or natural causes.   Well after having a long chat with Kelly and making a new friend we started off for the ghost event.  The town is very physically small so the event venues were within walking distance of the cafe.  Our first stop was the Million Dollar Courthouse.  We drove up and the doors were open with a few people standing inside the hall entrances.  Nikki was there and greeted us again.  She let us use a couple of her flashlights as we didn't have many ourselves.  Our participating in the event was not planned on.  Dennis didn't bring any of his usual equipement and i had my basic stuff....camera, voice recorder and spirit box.   Karen also didn't bring much either.  The three of us walked through from room to room taking photos but waiting until later to open up a spirit box session or do a voice EVP session.  There were too many other people there just looking around the darkened builidng who were not into the ghost experience including young children.  As the night went along, the tourists started to wan so we walked back into the jail cells directly behind the court room and did an EVP session with spirit box and just us  talking.   As of this writing I haven't listened to the audio portion of our investigation.  We ended the courthouse session and made our way to the Thompson Opera House.

Ben who was also part of Nikki's paranormal team was waiting for us in the opera  house.  Nikki let him know we were coming to do a short tour and investigation.  We were the only ones inside along with Ben as everyone else were in the courthouse still.  We got a short history from Ben of the building and he led us to the upper floor stage area.  The theater has been kept in very good condition as they have entertainment inside from time to time.   We walked up onstage then he led us down under the stage into a dressing room.  He and Nikki both have said this is the hot spot of the theater.  Nikki told us of one experience she will never forget.  She was following another girl into the dressing room when she witnessed the girl's ponytail being pulled up.  She also said it was recorded on video.  After calming her down, Nikki walked back up the stairs to get to the main stage area and was poked rather hard in her chest.  It was like someone was poking her with their finger.  She also has been scratched in here as well.  They are not sure who did this or why.  Our EVP sessions seemed to go well as none of us were scratched or poked.  Around 10 pm another small group of people was scheduled to come in and do their investigation so we packed our gear and left.  We thanked Ben for letting us in and showing us around.  This was a day of unexpected meetings and happenings...all were friendly and welcoming. 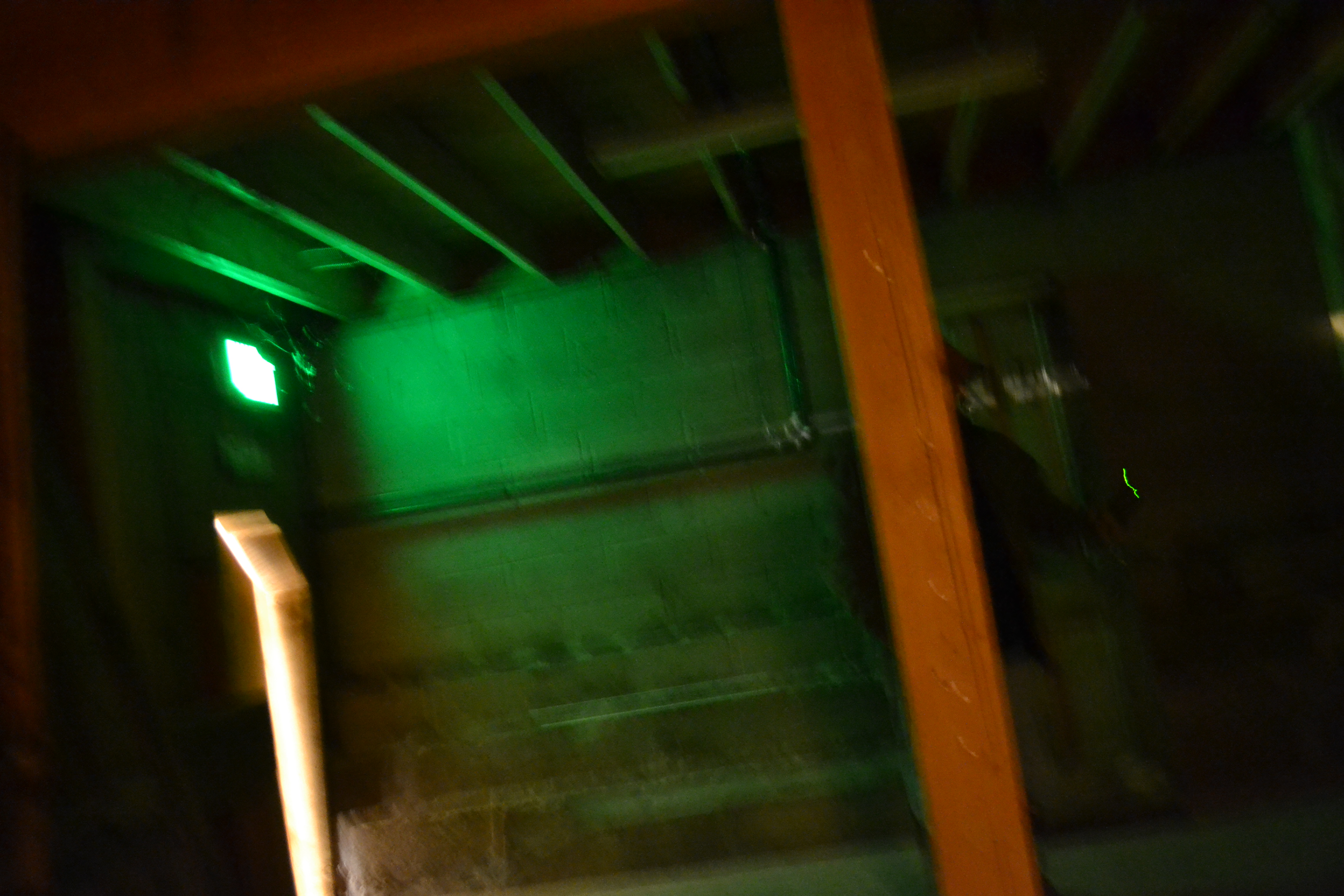